The Murmur Study by Christopher Baker in 2009 bears a resemblance to The Listening Post, tackling the same ideas in a new way. The piece consists of 30 thermal printers that monitor Twitter for tweets consisting of “emotional utterances” such as ‘argh’, ‘ugh’, ‘ewww’, ‘grrr’ and so on. It then prints these statuses onto a long, thin strip of paper, accumulating more and mores statuses as time goes on. Over time the papers begin to pile on the ground in a huge tangled pile. A comment on what Baker refers to as ‘digital small talk’, Baker seeks for audiences to understand the permanence of this chatter, as companies record and archive these fleeting thoughts. It also makes one pause to see the sheer volume of these tweets, just a tiny fraction of what is actually being said on the internet. There is also an interesting play between what is analog and what is digital. Unlike the Listening Post, which displays things digitally, the Murmur Study gives something digital actual form. We have interplay between the seemingly impermanent (digital), and the permanent (analog). Baker’s piece is an excellent commentary on many’s lack of awareness concerning what they post online and it’s lasting effects. 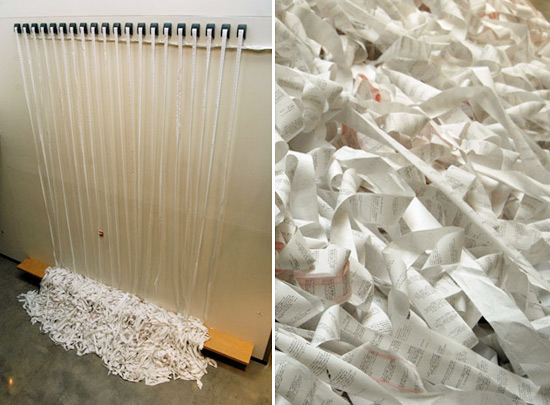 Interesting fact: The
paper from this piece is 100% recycled in other projects.